The History of Steamboat Landing


Steamboat Landing was built in 1886 as a boathouse for steamboats that brought passengers and freight to the big hotels that existed at that time in Blue Mountain Lake. 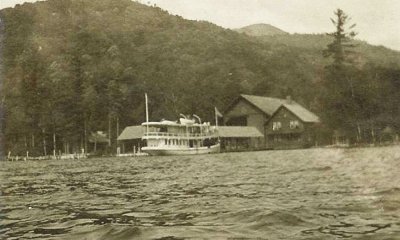 Many elites came by steamboat to vacation at the Prospect House. The Prospect House on Blue Mountain Lake was the most luxurious hotel in the Adirondacks. It was four-and-a-half stories high and had 300 guest rooms with a resident orchestra. It was most notably famous for being the first hotel in the world that had electric lights in every room! In fact, the wiring was even overseen by Thomas Edison himself.

The most impressive of all the steamboats of the central Adirondacks was the seventy-five foot, double-decked Tuscarora. The Tuscarora was built in Blue Mountain Lake for W.W. Durant's steamboat business in 1900. She was launched from Steamboat Landing on June 26, 1900. It is written that she was christened by Howard Durant’s daughter, Marion. It was apparently quite a celebration with plenty of lager beer, whiskey, and cigars.

The first skipper was a New York City pilot named Prindle. Prindle didn’t prove to be the best navigator of the lake water. He was known for scraping paint off the boat or hitting the propeller on rocks when docking it at the Prospect House. The next pilot was Norris Hale in 1901. From 1902 to part of 1904, Henry Mansfield had charge. Hale returned in 1904 and continued to capably pilot the Tuscarora until he retired in 1917. 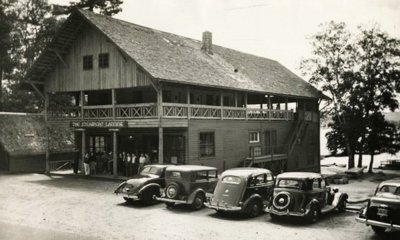 The Tuscarora was mainly used on heavy traffic days and had a capacity for 300 passengers. The steam whistle on the Tuscarora was a chord of three notes whose sound stood out among the smaller steamboats on the lake.

Following Hale’s retirement, the Tuscarora was piloted by Mr. Maurice Callahan. Maurice was also manager of the Raquette Lake Transportation Co. which owned the steamboats and Marion River Carry Railroad line. To move this large boat through the narrow channels and turn her at the Carry required a lot of skill. Mr. Callahan was known to be very skilled at this. Mr. Callahan still has relatives living here in Indian Lake and the hamlet of Blue Mountain.

In 1929, the Tuscarora was retired and five years later was bought by Robert Graham, a prominent architect who renovated it as his summer camp. Beached on the northeastern shore, it was used for many years by four generations of the Graham family. It still exists and rests on that shoreline of Blue. Its history and stories are still cherished by the current owner.

In the 1930's Steamboat Landing was converted from a boathouse to seasonal lodging. There has always been lodging since that time, but it has also been a gas station, restaurant, and more recently an outfitters store. Currently, Steamboat Landing's main focus is on vacation lodging. It's purpose is really the same for you as it was for those that visited Blue Mountain Lake over a century ago. A place to relax, enjoy the lake, explore the outdoors and to breathe in the mountain air!

Visit our historic Steamboat Landing. We look forward to sharing this special place with you!